We just got done watching the new Gamers movie. It had a very different feel than the first two. Not that this was a bad thing. It focused mostly around one of the characters, but all of the favorites were there. I can’t say much as the movie hasn’t been released yet, but I would give it a 5 out of 5. 🙂

We are in the credits!

VJ and I went to the park today for Billy’s birthday party. She managed to get cake all over herself.

We are mostly moved into our new place in Cape Coral. It’s an older quirky 4 bedroom/2 bath house in NE CC. We are just off Hancock and Del Prado. It’s a nice size with a fenced in back yard so Kouga can run til he passes out. 🙂

It’s a little quirky because it has been added on to a few times in the past. And I doubt that all the work was done with permits and contractors. In fact, I’m pretty sure that it wasn’t. They recently tiles the floors and they didn’t do much to level the floor, so not much sits flat. Some of the doors will need to be adjusted so that they fit a bit better. But all in all I like it. Hopefully we will be here for a few years.

A major plus of it is that we are like 10 minutes away from Grandmas. Now if we want to go out to a movie or to dinner, we don’t have to work out how to get VJ to mom’s house. A big draw back is that we are about an hour away from a lot of our friends. 🙁

Yesterday, Kristen and I went to see one of my favorite movies. Casablanca was playing at a theater in Naples as part of it’s 70th Anniversary event. I think I have seen it about 50 times. It was Kristen’s first. It was great to watch it with her. I hope that we can go to more of the special screenings of movies. I would love to see Jaws on the big screen one day. 🙂

I spent the first 6 months unemployed. Then I got a great job with a local IT company. The pay wasn’t as much as I made before, but I am really happy with the working conditions.

In February, we found out we were going to have a baby. We had been trying for just a little while. Violet is amazing. She joined us on Halloween. Everyone says how much it will change your life, but you really can’t understand until it happens to you. I love her so much it makes my heart hurt when I don’t get to see her for a while.

It seems that this was the year to have a baby. Kristen’s sister had a little boy in April, her cousin had a girl just before we had Violet, and our good friends Patrick & Lindsay had Stella about 2 weeks after Violet arrived.  Yay babies!

Our gaming sessions have been interrupted a bit because of the babies, but it was a great year for games. We started playing Pathfinder and have been working through one of their huge adventure paths. Collin introduced us to some more Steve Jackson games. It seems that every week we get some games in. I’m hoping we can get back to a regular schedule.

All in all, there were a lot of ups and downs in 2011, but it ended on an upswing. We closed out the year with Erin, Billy, & Robbie over to play games and watch the Dick Clark special.

I hope everyone has a fantastic 2012! 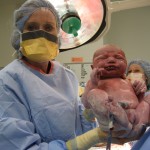 At 1750 (5:50PM) on 31 October 2011, Violet Jane came into the world. She was 7lb 11oz & 19 inches. She was due on the 29th, but was running late. We decided to induce on the 31st, but hours later there was little progress. We talked to our Dr about a possible C-Section in case things weren’t going well, but after hours of labor, it was looking more and more like we would have to do that.

I was lucky and got to go into the OR with Kris and was there to bring our baby into the world. It was an amazing thing. Admittedly, I got to see more of my wife’s insides than I would have liked, but it was still an incredible experience. I cried when the Dr held up Violet and showed her to us. Yeah, she was all covered in baby cheese, but she was still perfect.

We are staying with Kristen’s parents for a few days so she won’t have to go up and down stairs until she has some energy back and can heal up some. I’ll add more soon. 🙂

So much is going on now. Less than 100 days until Violet arrives. We have received some gifts already. A stroller and a car seat. Yay! We have a doctor appointment next week. Not sure if we get to have another ultrasound. I hope we can. I’d like more pics to post. 🙂

We went to see the new Harry Potter film. I was warned ahead of time (Tara) that it wasn’t close to the books. I didn’t expect it to be from what I saw of the previews, but knowing that ahead of time made it a bit more enjoyable. I wasn’t surprised on how different it was. Parts of it were incredible. My only real complaint with it is that during the massive wizard fight, they really should have used something besides blue effects. I think a bit more color would have worked. It just looked like everyone was casting the same thing.

We have had a lot of good gaming lately. Pathfinder, Munchkin, and now Zombie Dice. I picked up ZD one day because it looked interesting. It was a bit of a trick to get the others to play it (they didn’t seem that interested in it). 8 games later, they didn’t want to stop. It is a nice quick game. I highly recommend it. The Pathfinder adventures have been a lot of fun too. It’d be nice to have the same group each time, but it’s hard to get everyone together all the time. We are almost done with the first chapter of it. I’m really hoping that we can continue this adventure path. I can’t wait to see them build a kingdom.

Work is going well. I think that I’m really getting the hang of it there. I’m more comfortable now when dealing with clients. I’m looking forward to learning more and dealing with new problems.

Erin and Billy finally brought Robbie into the world. 🙂 Both Mom and baby are doing ok. She had to have C-section and had to stay in the hospital a few extra days because of it. He’s adorable. I can’t wait for mine now. 🙂